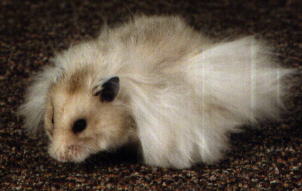 What-A-Mess , a Longhaired Smoked Pearl, was born on March 7th, 1992. His Father was Myth , a longhaired Dark Grey, and Mother was Midget , a Longhaired Satin Dark Grey. At the age of 26 days, after they had been weaned and separated into sexes, one of the males developed a slight cold. Following usual practise we mixed antibiotic into their daily porridge.

As with all young animals there is a tendency for them to "play fight". This usually ends up with one of the babies being rolled into the dish of porridge. This happened to this group of males. Unfortunately the antibiotic colours the porridge GREEN and, yes you have guessed correctly, the one that fell into the GREEN porridge came out with his back end coloured GREEN . We should point out that the sawdust sticks to the porridge, so not only was his rear end coloured green but decorated with curls of sawdust.

On seeing this Chris exclaimed "WHAT A MESS " and the name stuck. He went on to be quite a character at displays especially when the story of how he got his name was told. He was also a very good show animal and won numerous Trophies.

He also fathered quite a few babies, notably his son IN-A-MESS and his daughter WHAT-A-BEAUT . He lived a full and active life and died on September 15th 1994.